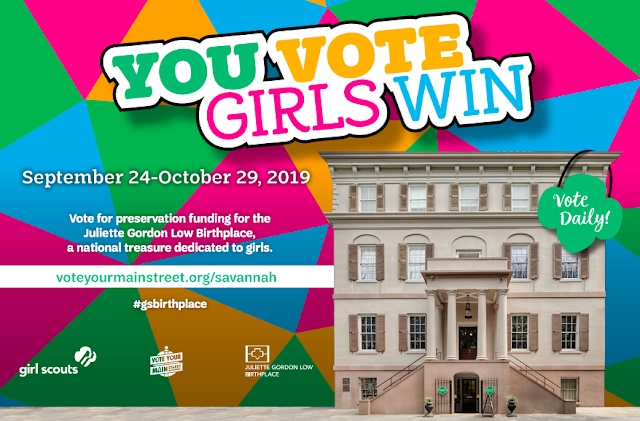 The Juliette Gordon Low Birthplace is a finalist in Partners in Preservation, a program of American Express and the National Trust for Historic Preservation.

You—yes, you!—can help the birthplace continue its important work to preserve the site while ensuring it meets the needs of 21st century girls. Your votes will help the Girl Scout organization address preservation and accessibility needs at the birthplace and raise awareness about the transformative work taking place there.

Vote daily for the birthplace through October 29, 2019!

Known as the “front door” of the Girl Scout Movement, for more than 60 years the Juliette Gordon Low Birthplace has helped visitors from all over the U.S. and world learn about the life of an incredible woman who in 1912 founded the largest, most powerful, and most successful girl leadership development program in the world: Juliette Gordon Low.

This year, Partners in Preservation is marking the 100th anniversary of the passage of the 19th amendment by providing funding for historic buildings and sites dedicated to women. As the founder of Girl Scouts, Juliette Gordon Low was paving the way for women in leadership before the 19th amendment was passed.

Visiting Juliette Gordon Low’s birthplace is an essential part of the Girl Scout experience—right up there with selling cookies, camping, and exploring STEM. Together we can ensure that Juliette Gordon Low’s legacy remains vibrant for future generations of girls and visitors from around the world!

Don’t forget to vote every day through October 29 for the Juliette Gordon Low Birthplace—and help us spread the word!

Girl Scouting builds girls of courage, confidence, and character who make the world a better place.
View all posts by gsci →
This entry was posted in General. Bookmark the permalink.
Loading Comments...
%d bloggers like this: