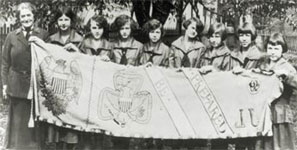 Gordon on October 31, 1860, in Savannah, Georgia. “Daisy,” as she was affectionately called by family and friends, was the second of six children born to William Washington Gordon and Eleanor Kinzie Gordon.

Juliette spent several years searching for something useful to do with her life. Her search took a new path in 1911, when she met Sir Robert Baden-Powell, founder of the Boy Scouts and Girl Guides, and became interested in the new youth movement. Afterward, she channeled all her considerable energies into the fledgling operation.

Less than a year later, she returned to the United States and made her historic telephone call to a friend, saying, “I’ve got something for the girls of Savannah, and all of America, and all the world, and we’re going to start it tonight!” On March 12, 1912, Juliette Low gathered 18 girls to register the first troop of American Girl Guides. Margaret “Daisy Doots” Gordon, her niece and namesake, was the first registered member. The name of the organization was changed to Girl Scouts the following year.

In developing the Girl Scout movement in the United States, Juliette brought girls of all backgrounds into the out-of-doors, giving them the opportunity to develop self-reliance and resourcefulness.

From the original 18 girls, Girl Scouting has grown to 3.2 million active members. Girl Scouts is the largest educational organization for girls in the world and has influenced the more than 50 million girls, women, and men who have belonged to it, culminating in a 100-year legacy that is still going strong!

It has been a great centennial celebration for Girl Scouting, and we hope all of you will take a moment to remember Juliette Gordon Low on her birthday on October 31. What a life she led. Daisy Low was a visionary, and she remains an inspiration to me and to so many of us in Girl Scouting. All of us in the Girl Scout Movement owe Daisy Low a debt of gratitude, and we know that the vision she had ”for the girls of Savannah, and all of America, and all the world” lives on in all of us who carry Girl Scouting forward into a new century.