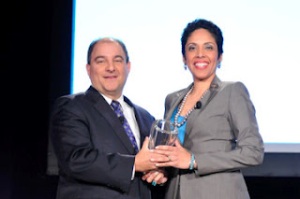 “We’re proud to receive this award from such a prestigious organization as the Kaitz Foundation, which is dedicated to enhancing and increasing diversity in media, would recognize the efforts of the Commission,” said Chávez, who accepted the award at the foundation’s annual awards dinner on Sept. 12.

The commission for Positive Images of Women and Girls was formed in 2010 and supports efforts to increase the number of female characters in the media and ensure that female roles, images, and portrayals are authentic, balanced and healthy. As part of this effort, the Commission seeks to have more positive images of women and girls in all media, especially programs designed for younger and teen audiences. Girl Scouts is a founding member of the commission along with The Creative Coalition, the National Association of Broadcasters, the National Cable & Telecommunications Association, and The Geena Davis Institute on Gender in Media.

“Through visionary leadership, this individual or organization has directly or indirectly fostered a more embracing and inclusive diversity environment” in the media industry, said the foundation in announcing the award. “Recognizing media’s role in influencing a child’s growth and development, the Healthy MEdia Commission for Positive Images of Women and Girls supports efforts to increase the number of female characters in the media and is working to ensure that female roles, images, and portrayals are authentic, balanced, and healthy. The Commission also brings together media leaders, subject experts and advocates for children to create recommendations for promoting positive media images.”

In November, the commission will issue a series of recommendations on how to encourage the proliferation of healthy images of women and girls in all forms of media during the Geena Davis Institute’s Symposium on Gender in the Media.