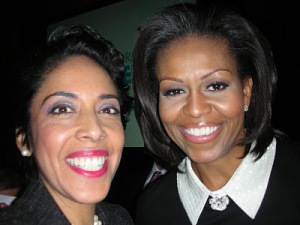 Anna Maria Chávez, Chief Executive Officer of Girl Scouts of the USA, today joined First Lady Michelle Obama in her battle against childhood obesity during the inaugural summit of the Partnership for a Healthier America, part of the First Lady’s Let’s Move! campaign.

The summit convened key organizations and leaders from the government, nonprofit, and private sectors in an effort to help reverse the growing epidemic of childhood obesity, which when combined with children who are overweight now affects nearly one in three young people ages 2 to 19 years old. In her keynote address, Mrs. Obama called on everyone to their part “because the fact is that our kids didn’t do this to themselves.”

During their brief conversation at the close of the summit, Mrs. Obama congratulated Chavez on her appointment as chief executive officer, reiterated her support and commitment to Girl Scouts, and expressed her enthusiasm for celebrating the iconic organization’s centennial in 2012. At the summit, which was co-chaired by former Senate Majority Leader Bill Frist and Newark Mayor Corey Booker, Chávez addressed some 800 executives from across the country, and pledged her support for ChildObesity 180, a nationwide initiative that seeks to provide an integrated national strategy to reverse childhood obesity in one generation.

“We as a nation must deal with the issue of childhood obesity,” Chávez said. “This affects the very health and well-being of our children—of our future. Girl Scouts as an organization is proud to join Mrs. Obama in the effort to reverse this epidemic within a generation.”